The Alness Flood of October 2006

After a series of storms and progressively rising spates during October 2006, the 'big one' arrived on the 26th! Water levels in the town of Alness peaked at 2.8m (about 8ft above summer low), the highest level on record since 1973 (and possibly back to the 1950s), and the flow rate was over 200 times normal summer low! There was local flooding throughout Easter Ross and the North East Highlands. To make matters worse, a short-lived hurricane came through during the evening of the 25th. 70mph winds brought down hundreds of trees locally, blocking some of our fishing access tracks and many roads. Fortunately, there were just a few days to go until the end of the season, and by the 28th we were fishing on the upper beats at least! 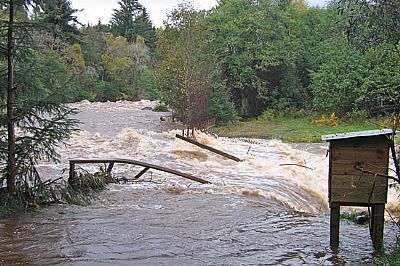 Here are a few photos showing the river in spate and its aftermath. The spate photos were taken just an hour or so after the river level peaked. Photos of the damage to access roads and infrastructure were taken on the 2nd November.

R1 - Boulder Run
Where did our road go?

Dalbreak
That boulder is under water! 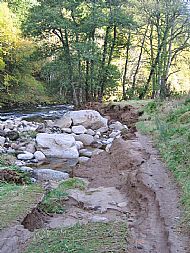 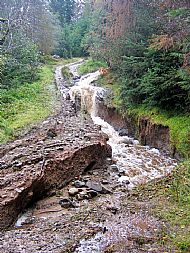 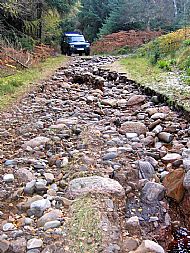 Below is a summary of the most serious damage to infrastructure on the lower beats caused by the huge spate on the Alness, and associated flooding within the Alness catchment of 26th October 2006. The content reproduced below was written at the time, when the beat boundaries were different from today. The numbering system (R1, B1 etc) refers to locations of photos taken at the time, some of which are reproduced above. 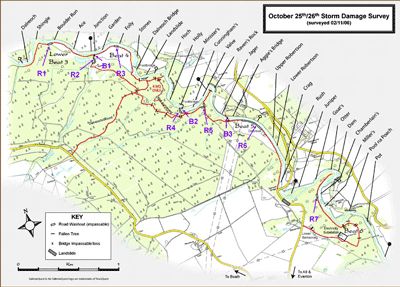 Beat 4
B1 - Bridge over culvert on Dalreoch Burn - partial washout, not suitable for vehicles.
R3 - Complete washout of road for 5m alongside Topham's Pot/Folly pools.
R4 - Complete loss of access road to Minister's pool from burn down (culvert blocked). Up to 3 ft (1m) deep.
B2 - Total loss of footbridge on Minister's pool. No access to left bank fishing on Minister's, Cunningham's, Flat Rock or Valve. Partial loss of walkway on Minister's LB, loss of second section of catwalk on Cunningham's RB.

Beat 6
R7 - Washout of road for 40m below Chamberlain's pool. 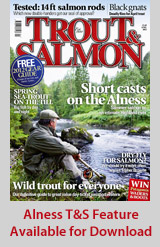 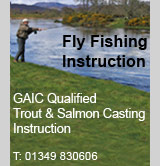